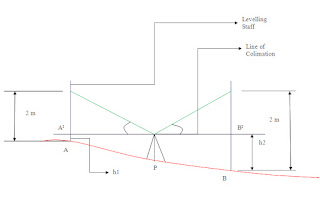 Procedure:
Tabulation
Formula
PA = KSACOS2(Angle A) + C COS (Angle B)
PB = KSBCOS2(Angle A) + C COS (Angle B)
Horizontal Distance between AB can be obtained by using Cosine rule
AB2 = PA2 + PB2 – 2PA x PB Cos APB
h1= 2- PAtan (Angle A)
h2= 2- PBtan (Angle B)
Difference in elevation between A and B = h2- h1
Gradient from A to B = Vertical distance AB/ Horizontal distance AB
Result: The gradient between the two stations is determined.
The gradient between the two stations A and B is  1 in ____