Methods of Demolition of Building Structures

Demolition means destruction, tearing down, breakup, removal of the whole parts of building, normally demolition is done when the life of building is over or to construct a new structure by replacing the older one, also it is carried out when the structure lost its stability or having any structural damage.
Demolition techniques
·         Non Engineering Demolition
o   Manual Demolition
·         Engineering Demolition
o   Mechanical Method
o   Implosion
o   Deconstruction Method

Engineering Demolition
Mechanical Method:
1.       Wrecking Ball Method
2.       Pusher Arm technique
3.       Thermic Lance Technique
4.       Non – Explosive Demolition
5.       Concrete Sawing Method
6.       Deliberate Collapse Method
7.       Pressure Jetting
·       Wrecking Ball Method: A Steel ball anti spin device which is suspended by a steel rope and swung by a drag rope, the weight of the ball is around 500 to 1000 Kg used with suitable fittings attached to a crane of adequate capacity, the building is dismantled by making the steel ball to hit the structure this method is much faster than manual method 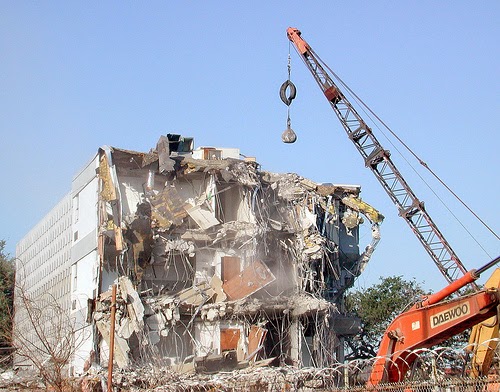 ·        Pusher Arm Technique: A Hydraulically powered pusher arm machine is mounted on tracked or wheeled chassis, this method is not recommended for large building but it is good for small masonry structure, the building is demolished by using the pusher arm. 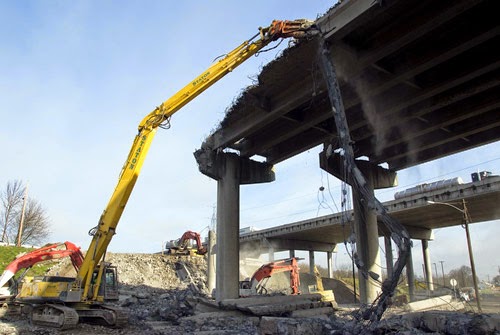 ·      Thermic Lace Technique: Flame is produced by having supply with pure oxygen with a temperature of 2500 degree centigrade to melt the reinforcement.

·         Non- Explosive Demolition: A Number of holes is drilled along the desired line of separation and are filled with slurry which is a special material when the slurry is filled in the holes water is poured into the drilled holes after few hours the slurry expands as a result cracking will appear on the structures which help in easy demolition of structure.
·       Concrete Sawing Method: Using the concrete saw the structure is been demolished which works on a high power supply helps in destruction of structure in an easy way. 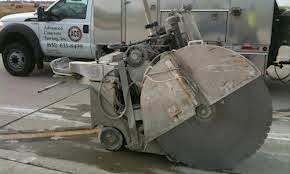 ·    Deliberate Collapse Method: The Collapse is usually achieved by either by removing key structural elements (e.g. with explosive charges) or by wire rope pulling at a high level of overturn this method is not suitable for pre stressed concrete structures.
·         Pressure Jetting: The Jet heads are generally small and so action of jet is mainly to loosen the aggregate by washing out softer mortar (water with high pressure). 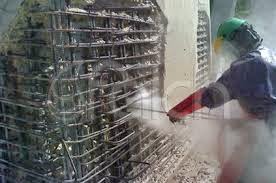 Implosion: Collapsing the structure inward, gravity makes the structure to collapse. If the supporting structure of a building at a certain point is removed the building may get damaged and the structure can be easily demolished. The procedure is followed by analysing the blue print of the building and the explosives is used on the key components of the building at different level from bottom to top i.e. from explosion should take place from lower level internal component then step by step to the top level by sequential order which result in demolition of building.