DETERMINATION OF HORIZONTAL DISTANCE AND ELEVATION

Aim:To determine the horizontal distance between two given stations of which one is in accessible and its elevation.
Instrument and Accesories Required:
Theodolite, Tripod Stand, Levelling Staff, Pegs, Arrows, etc. 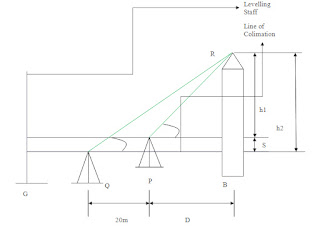